Baga Beach (Everything You Need to Know) - Goa Yell

Baga beach is an option for those who want to be away from the hustle and bustle found on the other beaches. Baga Beach in Goa looks as if it has come straight out of a painting… Majestic white waves rushing to wipe out the feet imprints left by you on the white sand while the wind continues to flirt with the palm trees. Goa’s Baga beach is a small but perfect beach located between its two more famous cousins, Anjuna on one side and Calangute on the other. It is a good place to enjoy some quite moments and dwell in peaceful contemplation with oneself. The Baga beach is more of a Fishing beach with the tourists from across the world trying to get that big catch.The Baga River flows down from one side offering a pleasant for children and those who love the water but can’t risk the rip currents that swirl round the mouth, where the river and the sea meet and on the far right bank, tourists at Baga beach will see a group of black rocks against which the sea crashes. One of the favourite beach in bardez side and a tourist attraction. This beach is famous for having salty bath for many people in Goa over the year, as this river has heavy waves among all the other beaches. 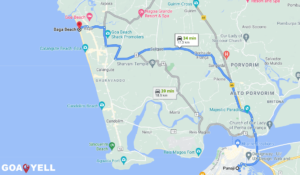 Besides this tiny river other attractions are high class hotels such as Royal Goans Club, the Marinha Douradoa resort Complex with three storeys. There is a sprawling Sun Village at Sankvaddi, which takes the beauty of bottle green hill which is dividing Baga from Arpora. Moving opposite to hilltop i.e. towards Arpora, there is situated a luxurious class Niyala Hotel, designed by Goa’s natural Architecture exponent Dean D’cruz. A Las Vegas Country Club down the hilltop along with attractive Gonsalves House in the Vicinity of St. Joseph High School. At the Baga bank of river placid, there is a Chapel of St. Annie, a STD boot providing best Communication facility for tourist built by Dona Engracia Braganca, a former Head Mistress of St. Joseph High School and her son Michael provide speedboat Entertainment for people driving for the view of river and showing scenes of Dolphins and Crocodile upper reaches of Mandovi River.

Engracia belongs to Fialho Family who has biggest land in Baga starting with Baga Retreat House, built by Fr. Adrian Le Tellier in 1952. On the foot of hilltop there is a huge black rock which known as Chor Biam, it is believed that treasures of shipwrecks from Arabian Sea are hidden here, alongwith old anchors, bells, cannons etc. Across the river there is a strange box – bridge, famously referred to as “The Coffin Bridge” which is built after the visits of international tourist. Once it was canoe where locals used for crossing to visit to Calangute beach, a neighbouring place. You’ll find lush paddy fields on the south is separated by river from the north settlement’s, you’ll see many people fishing in the river, women and girls looking for oysters dipping into river upto neck. People here in Baga are generous and entertaining. Here you’ll get to see rare river fest called sangodd during Sao Joao feast. Thus this place is with full of enjoyable scene and lot picnic mood. 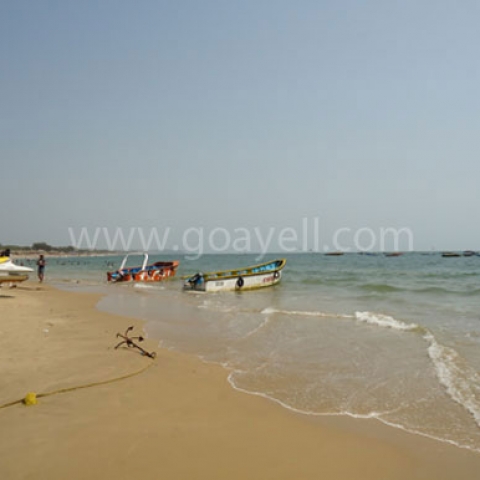 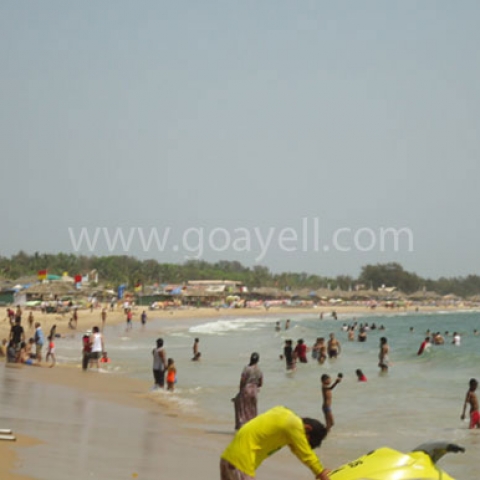 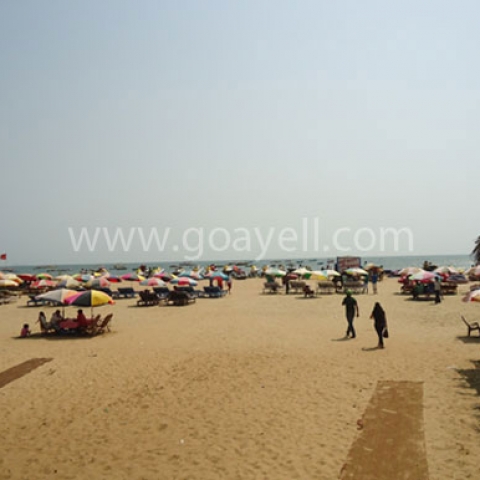 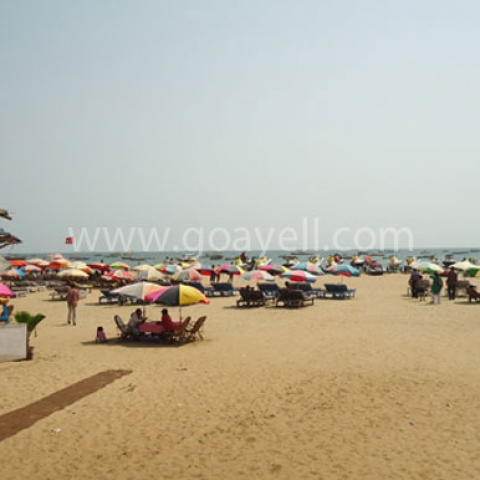 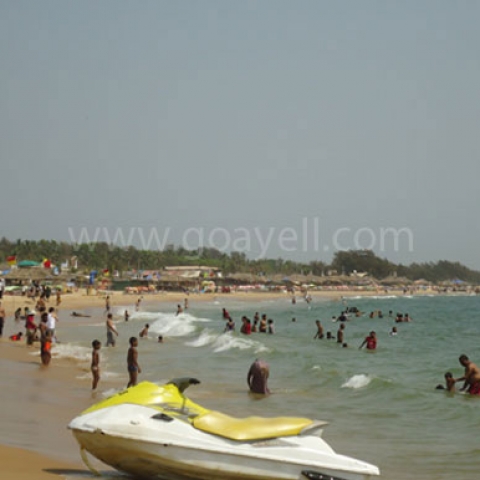 The closest railway station to Baga is Thivim. Expect to pay around $5 in a taxi to get to Baga from the railway station. Alternatively, Goa’s Dabolim airport is located 50 kilometers (31 miles) away, and the fare in a pre-paid taxi is around $15.

The weather at Baga is warm throughout the year. Temperatures rarely reach more than 33 degrees Celsius (91 degrees Fahrenheit) during the day or drop below 20 degrees Celsius (68 degrees Fahrenheit) at night. Some winter nights can get a bit chilly from December to February though. Baga receives rain from the southwest monsoon from June to August. The beach huts close during this time, although many nightspots remain open. The tourist season kicks off in late October, and starts slowing down around March.

Water sports are a huge attraction. You can go para sailing for around $25, wake boarding for $15, windsurfing for $10, kite surfing for $45, or take a ride on a jet ski for $12. Dolphin spotting trips are on offer for around $8 per person, and island trips for $35. However, many people are simply content lazing on the sun lounges in front of the beach shacks all day and feasting on a steady supply of food, beer, and cocktails. The Wednesday flea market at Anjuna Beach and Saturday night market at Arpora are both close by, and will satisfy even the best shopaholics.

The Ronil Beach Resort has double rooms for $85 per night and is centrally located, five minutes walk from the beach. The Colonia Santa Maria is a bit more upmarket and has cottages leading to the beach for $100. Baga also has some great boutique hotels. The best are Casa Baga, located right near the heart of the action, and Baia Do Sol, with its wonderful location on the river front. Rates start from $130 and $45 per night for a double respectively. A very popular budget choice is the relaxed Alidia Beach Cottages (email:[email protected]), which fronts onto the beach. Expect to pay around $20 onwards for a room.

Baga is well known for its nightlife, most of which can be found in and around Tito’s Lane — home to the infamous Club Tito and Cafe Mambo. Both hold regular events with interstate DJs. The lavish and classy open air Loungefly bar also features top DJs and will leave a memorable impression. Head to hip Cocktails and Dreams to try an astonishing variety of cocktails and shooters, and be dazzled by barmen with impressive flame juggling skills. Guys will love the Sports Cafe. For those who prefer live music, Cavala caters to an older crowd and has Rock n Roll every Saturday night.

Fiesta (opposite Club Titos) will take your breath away with its magical setting and scrumptious food. Britto’s, a beach shack specializing in seafood, is a popular tourist place that serves delicious Goan cuisine which isn’t too spicy for the western palate. Find it at the far northern end of the beach. You can dine on a table right on the beach. The Lila Cafe, with its offerings of freshly baked bread on the river bank, is recommended for breakfast and lunch. The spectacular garden setting of East Meets West is perfect for romantic night time dining, and there’s live music nightly too. ‘Baga Beach.

Q How far is Baga Beach?