Church of St Francis of Assisi

Church of St Francis of Assisi

Church of Saint Francis of Assisi, Roman Catholic church situated in the main square of Old Goa, 6 miles (10 kilometres) east of Panaji, Goa’s state capital. The Church of St. Francis of Assisi, together with a convent, was established by eight Portuguese Franciscan friars who landed in Goa in 1517. 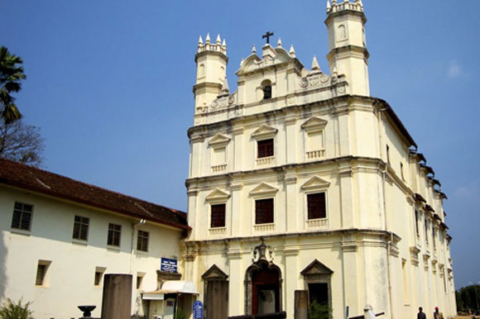 The original church began as a small chapel, which was modified to a church in 1521 and consecratedin 1602. That building was replaced by the current structure, erected in 1661. The present-day church is a mixture of styles. Its exterior decoration is in the simple Tuscan order, but its interior—especially the main altar—is richly Baroque with Corinthian features. The three-tier exterior facade has two distinct octagonal towers, one on each side, and a small niche that houses a statue of Mary. The church’s interior includes a richly ornamental niche with a tabernacle supported by the Four Evangelists on the main altar. Above the tabernacle are two large statues, one of St. Francis of Assisi and the other of the crucified Christ. The church’s gilded interior is decorated with paintings of events in the life of St. Francis, carved woodwork, additional statues, and frescos with intricate floral designs.
The convent, contiguous to the church, now houses a museum that was set up by the Archaeological Survey of India in 1964. The museum contains artifacts, paintings, and sculptures that testify to Goa’s rich and vibrant history.