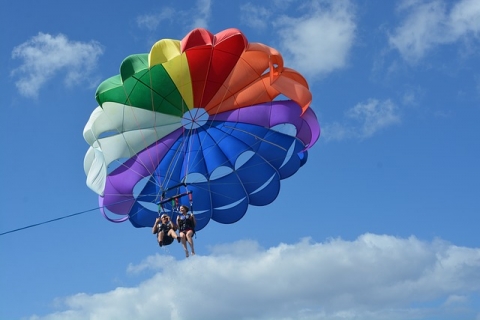 No state in India promotes or gets the chance of indulging in the water sports as much as what Goa gets to take it up. Parasailing is a hobby for many and an adventure sport for the rest. It is one of the thrilling sports for which one would require a lot of guts and also a speedboat and a parachute. The speedboats speed ahead while the parachute is tied up to the speedboat. The parasail harness is at one end while the speedboat zooms ahead. Eventually, the parachute flies high as the speedboat moves ahead. The person tucked on to the parachute enjoys the sight of the sky above and water below. Parasailing in Goa is one adventure everyone would want to be a part off. Parasailors have guts and they hardly ever miss the chance to get out of the swing. Now Goa is taking up parasailing in full swing by starting training the children and youngsters who are interested in taking up parasailing as a sport.
Cities in Goa have the tourists coming in 12 months a year. Hence, thinking of the sports in which they can get comfortable in or are used to.
In Goa, parasailing is an adventure that everybody would want to be a part of. The foreign tourists like taking up such adventure sports as their hobby and like taking up these risks. The government of Goa has also taken up the parasailing coaching for those who are interested in learning more of parasailing. The beaches like Majorda, Candolim and Dona Paula beach have opted into parasailing already. The tourists enjoy immensely hence the government and the non-government comities have started with coaching at minimal rates, which can be affordable easily. For those who just want to take a closer look and not be a part of the game, special shacks have been made so that they can view the Para sailors at a closer distance. Hence, taking the extra chance and going about it is much more helpful than just viewing.

Safety Tip during Para Sailing:
Double check you harness, cord and other gear before taking off. Apart from the boat operator, ensure there is another observer in the boat, because the boat operator cannot keep an eye on you . Para Sailing should be Avoided when it is Raining or when the Winds are Strong.

What you need to know
You can soar on your own or in a group. Before taking up parasailing, ensure that you are physically fit. Choose your operator very carefully because poor instructions and the inability to communicate with the operator can prove to be very dangerous. There is no common international regulatory authority that governs and regulates the sport. Each country has its own state bodies with their own rules and regulations.

What you must carry
If you are a beginner, then there no need to splurge on expensive and heavy equipment. The towboat, tow rope, parasail, lifejacket, and wetsuits are all provided by the tour operator as part of the overall package.

What exactly is parasailing?
Parasailing involves attaching a rope, about 300 feet long to the parasail harness at one end and the other end to the speedboat. As the speedboat speeds off into the ocean, the sailor is heaved up in the air. The sailor is firmly attached to the rope and thus has little or no control over the parachute. The speedboat reins control of the momentum and height and the person flying the parasail controls the parasail sideways. While parasailing, one can take pleasure in the vision of the clear blue sky and the stunningly beautiful aquamarine water below.
‘Parasailing in Anjuna Beach’